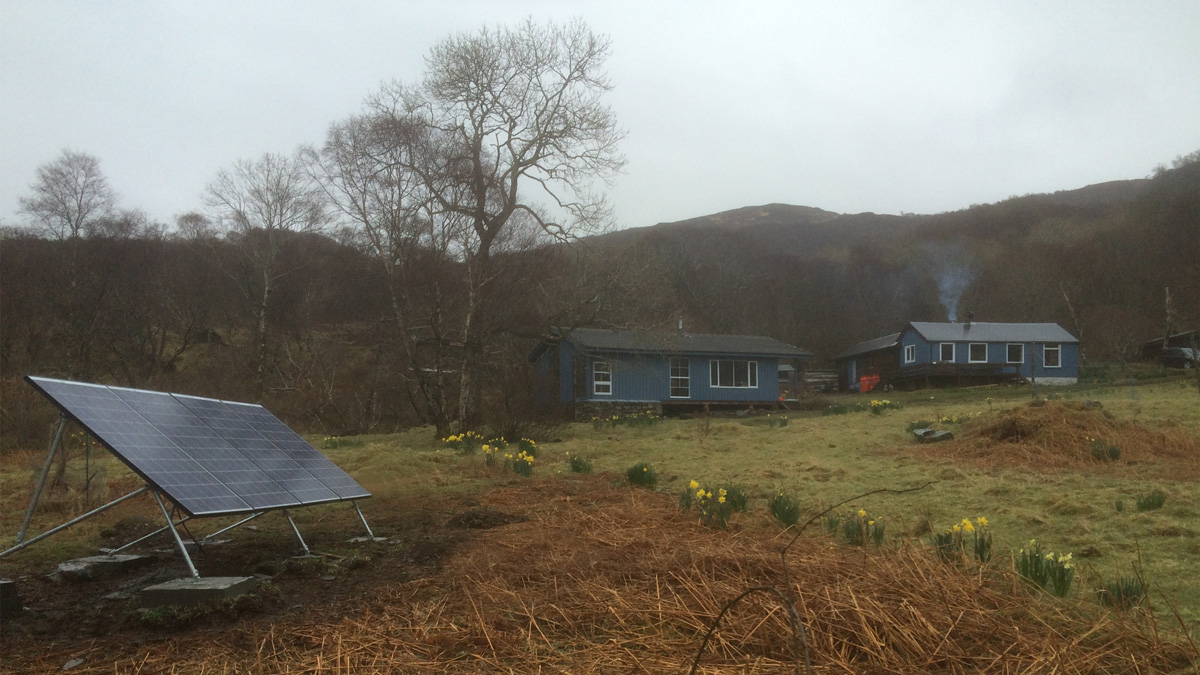 Success with Simple Off Grid System for Scottish Holiday Homes

Camas Salach is a remote property on the shores of Loch Sunart owned by a family trust. It consists of 2 small holiday cottages (similar in size to static caravans) and is accessed either by sea or via a very long, heavily potholed track. The owners use the property for holidays for their family and friends-  so occupancy can be fairly high in the summer, with long breaks over the winter. With no prospect of a grid connection either now or in the future, all cooking, refrigeration and most of the heating has been done on gas and unfortunately the owners have had a series of very unreliable hand start generators. The Trust was also poorly advised in the past as to the potential of wind power and had spent a significant amount of money on infrastructure that has proved to be unreliable.

Jamie, from Alternative Engineering was called in to have a look at their situation. There is a large burn close by which he advised may be an option to exploit for hydro power at a later date but initially an infrastructure on the site was needed.  The convenience of uninterrupted power was a very appealing concept to the clients; but due to the high number of different people passing through the properties, they wanted a reasonably automatic and low maintenance system.

Working closely with the range of power, monitoring and control products from Energy Solutions, Jamie advised that the project didn’t warrant a full E-Plex controlled system; rather a simpler, robust configuration built out of the relevant components was put forward; including a new generator and gel batteries - an obvious choice due to their lack of maintenance.

The entire system was built into a cabinet to make installation as easy as possible in this very remote situation. The Victron Multi Plus inverter providing power and automatic generator starting, and the second AC output in the inverter  being utilised for water heating to cut down on gas usage. There is also a 1KW solar array via a Victron MPPT DC charge controller to keep up with the small loads and to keep the batteries topped up over the winter.

The customer is delighted with their new found 24 hour power - and the fact they do not need to brave the elements going outside to start a generator which may or may not run!

“We are so pleased with the work you have done setting up the electricity system for our two cottages….you really listened to our hoped-for outcomes, visited the site to assess the options and difficulties and then gave excellent advice on possible combinations of generator and green energy, explaining the various advantages and costs. The project was completed within the estimated time scale...and we are confident we’ll be able to operate the system.”  Maggie Wilson, Wilson Trust